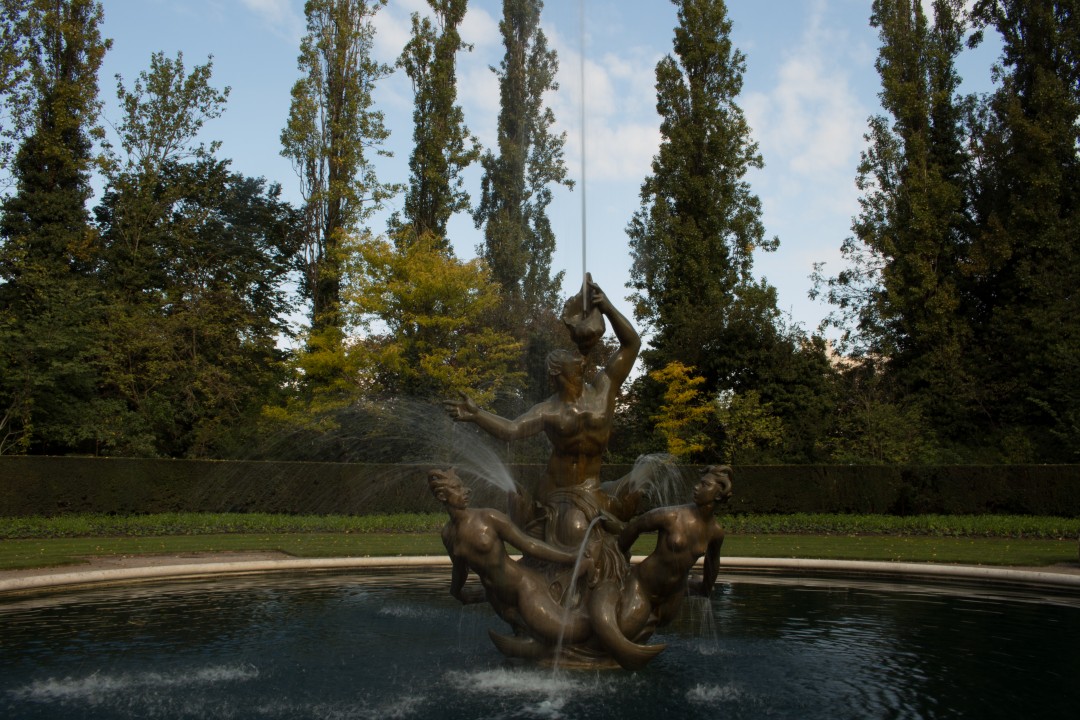 “Des Esseintes fell into revery. The fireplace piled with logs gave forth a smell of burning wood. He opened the window slightly. Like a high tapestry of black ermine, the sky rose before him, black flecked with white. An icy wind swept past, accelerated the crazy flight of the snow, and reversed the color order. The heraldic tapestry of heaven returned, became a true ermine, a white flecked with black, in its turn, by the specks of darkness dispersed among the flakes.

“He closed the window. This abrupt transition from torrid warmth to cold winter affected him. He crouched near the fire and it occurred to him that he needed a cordial to revive his flagging spirits. He went to the dining room where, built in one of the panels, was a closet containing a number of tiny casks, ranged side by side, and resting on small stands of sandal wood. This collection of barrels he called his mouth organ. A stem could connect all the spigots and control them by a single movement, so that once attached, he had only to press a button concealed in the woodwork to turn on all the taps at the same time and fill the mugs placed underneath.

“The organ was now open. The stops labelled flute, horn, celestial voice, were pulled out, ready to be placed. Des Esseintes sipped here and there, enjoying the inner symphonies, succeeded in procuring sensations in his throat analogous to those which music gives to the ear. Moreover, each liquor corresponded, according to his thinking, to the sound of some instrument. Dry curacoa, for example, to the clarinet whose tone is sourish and velvety; kümmel to the oboe whose sonorous notes snuffle; mint and anisette to the flute, at once sugary and peppery, puling and sweet; while, to complete the orchestra, kirschwasser has the furious ring of the trumpet; gin and whiskey burn the palate with their strident crashings of trombones and cornets; brandy storms with the deafening hubbub of tubas; while the thunder-claps of the cymbals and the furiously beaten drum roll in the mouth by means of the rakis de Chio.

“He also thought that the comparison could be continued, that quartets of string instruments could play under the palate, with the violin simulated by old brandy, fumous and fine, piercing and frail; the tenor violin by rum, louder and more sonorous; the cello by the lacerating and lingering ratafia, melancholy and caressing; with the double-bass, full-bodied, solid and dark as the old bitters. If one wished to form a quintet, one could even add a fifth instrument with the vibrant taste, the silvery detached and shrill note of dry cumin imitating the harp. The comparison was further prolonged. Tone relationships existed in the music of liquors; to cite but one note, benedictine represents, so to speak, the minor key of that major key of alcohols which are designated in commercial scores, under the name of green Chartreuse.

“These principles once admitted, he succeeded, after numerous experiments, in enjoying silent melodies on his tongue, mute funeral marches, in hearing, in his mouth, solos of mint, duos of ratafia and rum. He was even able to transfer to his palate real pieces of music, following the composer step by step, rendering his thought, his effects, his nuances, by combinations or contrasts of liquors, by approximative and skilled mixtures. At other times, he himself composed melodies, executed pastorals with mild black-currant which evoked, in his throat, the trillings of nightingales; with the tender chouva cocoa which sang saccharine songs like The Romance of Estelle and the Ah! Shall I tell you, mama, of past days.

“But on this evening Des Esseintes was not inclined to listen to this music. He confined himself to sounding one note on the keyboard of his organ, by swallowing a little glass of genuine Irish whiskey”.

from Joris-Karl Huysmans, À rebours (Against Nature or Against the Grain), 1884